Posted by Unknown at 2:55 PM No comments:

If you love historical romance novels, be sure to visit Facebook's I Love Historical Romance Group on Thursday, October 29th . I'll be co-hosting and posting about my books. Visitors will also have the opportunity to scroll around and learn about other Historical Romance authors. If you haven't checked out this FB page before, I think you'll enjoy the visit and, perhaps, make it

one of your favorite stops! 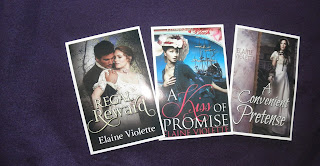 Have a Great Day,

Elaine
Posted by Unknown at 2:59 PM No comments:


An Author’s Experience Writing a Series

Today I am pleased to welcome, author Lily Bishop. Lily’s new release, Breaking Even, continues her City Lights series. I asked her tell us about her decision to be a series author. Her experience might be helpful to others contemplating stories that continue beyond the first book.

Lily, why did you decide to launch a series rather than single titles, and what advantages/problems occurred during planning?

No Strings Attached, Book One in the City Lights series, tells the story of Fox and Laura. They have a whirlwind romance in Las Vegas, but then learn they have to work together. Fox is investigating embezzlement where Laura works, and she is the prime suspect.

At the end of this book, my husband said he could see the underlying embezzlement plot line continuing, although in my mind it was wrapped up. So I began thinking how I could revisit the embezzlement plot line and so I began, Book Two, Under His Protection. In Book Two, the leading lady is an attorney running for attorney general. She hires Fox’s brother Lee to provide bodyguard services after she receives death threats.

So one of main characters led the way for a new plot. Did you continue the story of other characters from your first book?

Yes, Fox and Laura feature in several scenes in all four books, and Lindsey and Ric appear in all four as well. Lee appears in books one, two and three.

Laura’s sister Lindsey became the driving force behind the rest of the series. I wanted Lindsey to end up with Ric, and they were both featured prominently in the first book. Unfortunately, she was young, only 22, and she had some growing up to do. I didn't feel like I could write her story next.

I see the importance of considering the age and maturity of characters as you develop them in future books. Does Breaking Even tell the sister’s story?

Yes. Lindsey’s romance has been problematic. There's an age difference, and readers know they weren't together during Under His Protection, the second book in the series. So we've ended up with an on-again, off-again romance, with some suspense thrown in. That may be more like real life, except we have super-yachts, private islands, and a horse farm. I started their story in book 3, a novella called For the Win. Since Lindsey featured prominently in book one, and she was missing for a good part of that book, I decided to tell what actually happened while she was on the island with Ric. Essentially I retold many of the events that happened in book one, but from Lindsey and Ric’s perspective. Since Laura didn’t know everything that happened to Lindsey on the island, we get to know Lindsey better.

Breaking Even (4) deals with the year between No Strings Attached (1) and Under His Protection (2). I won’t say that it ends with a cliffhanger, but there are unanswered questions about what will come next for Ric and Lindsey. We know they aren’t together in Under His Protection (2). Their story will finish at the end of book 5, which I plan to release early next year. I still have a big overarching plot to wrap up. In addition, a secondary character named Chloe was kidnapped near the end of book 2, and we need to see what happened to her. She will feature heavily in the fifth book, almost a romance within a romance. Chronologically, the books occur 1, 3, 4, 2, and 5.

From your responses, I see the importance of keeping track of each of your character’s characteristics, journeys, and connections. Also, a series author needs to reflect on the changes in each character as he or she appears in each of the book. It’s interesting that you have an overarching theme that carries through all the books as well.  So much to keep track of as you write!

With so much to think about, would you write another series?

The good thing about series romances is that the readers get to know connected characters and their families. I love these characters, and I'll be sad to see them go. I’m planning a spinoff series with two FBI agents who feature in the second and fifth books, but I don’t have that fleshed out yet.

Originally, I planned for the books to be standalone but connected, so that they could be read in any order. Unfortunately, that's not the way the books came to me. Sometimes as a writer you have to go with the way the story is leading. Because Ric and Lindsey’s story spans a year and a half and three distinct periods, I decided to break it into three books. The final book has a working title of Winner Take All (5), and we will check in with all of the couples. Readers should expect more than one viewpoint couple in Book Five.

All four books are currently available on Amazon, and books one through three are available at other vendors. No Strings Attached (1) is currently on sale for 99 cents at all vendors. You can find all of the buy links here: http://lilybishop.com/no-strings-attached/

In your newest book of the series, Breaking Even, tell us about your hero. What do you like most about him? Does he have a weakness?
Ric Salzana is from Venezuela, although he attended college in the United States. He owns a resort on a fictional private island in the Bahamas name Calliope. We first meet him in book one, when he disables the main character with a stun gun. There are criminal elements in his family, but he works hard to stay on the right side of the law. I like that when he meets Lindsey, he falls hard, but he’s patient with her, and he waits for her to catch up with him. His weakness is that sometimes he acts without thinking.
Tell us about your heroine. What do you like most about her? Does she have a weakness?
Lindsey Todd has just returned from a weekend at The Castle, a resort on the private island of Calliope. (These events are covered in For the Win) When I first created Lindsey, a long time ago, she had started out as a ditzy character, but I decided to flip it. What if she were at the other end of the spectrum? What if she were a mathematical genius who struggled to fit in and feel accepted? Now she is starting graduate school, and she and Ric are attempting a long distance relationship. I like that Lindsey isn’t waiting on a man to start her life. Her weakness is that she’s naive and tends to trust too easily.

Please tell my readers more about Lindsey and Ric’s story.
Their stories that build their romance are bigger than one book. For the Win is a prequel, followed by Breaking Even.

For the Win: When blackjack turns to blackmail...

Lindsey Todd is on fire...at the blackjack table. She can't lose. After perfecting a system that helps her win big at every hand, Vaughn Bruce learns her secret and blackmails her into entering a high roller blackjack tournament in the Bahamas.

When Ric Salzana spots Lindsey Todd and the shady man who enters his casino, something doesn't add up. Once he realizes that Lindsey and Vaughn have been playing with counterfeit chips, Ric has the man arrested. But, Ric has other plans for Lindsey. Can he convince her to confess that she was cheating or will Lindsey beat him at his own game?

But for Lindsey Todd, all she wants is to break even and get back to the real world, focusing on graduate school in South Carolina. However, with her heart still in Caribbean with the sexy Ric Salzana, Lindsey's mind is miles away.

When Ric Salzana realizes that old enemies have resurfaced and that Lindsey is in danger, he'll do anything to save her--even if it means jeopardizing everything they've worked so hard to build. Can Ric keep Lindsey safe before all the cards start crumbing down or is their downfall just the bad luck of the draw?

Thank you, Lily, for telling us more about your City Lights series and your newest release, Breaking Even. I wish you much success as you go forward with Book Five.

Short Bio:
Lily Bishop is a transplanted Georgian who lives in the upstate of South Carolina with her husband and two children. By day, she works full-time as a data analyst. She writes about strong women and the men who love them. She writes linked books with connected couples and an overarching storyline. She loves the Caribbean, although she’s only been via cruise ship, not yacht or private plane like her characters.

Questions and comments are welcome!

Of Faith Under Fire

A Kiss of Promise